MOROCCO FROM THE ATLAS TO THE SAHARA 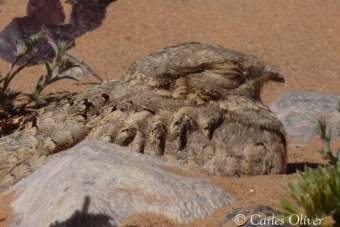 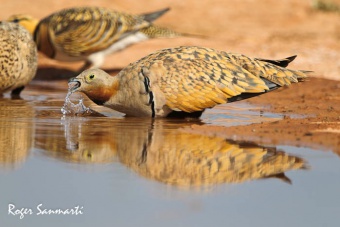 Price include: Transport with comfortable bus and coach, accommodation in good hotels with private facilities, full board, professional guide, all entrance taxes.

MOROCCO: FROM THE ATLAS TO THE SAHARA

Morocco has one of the richest birdlife in the Western Palearctic,Due to its variety of landscapes, it ranks as one of the best countries for birdwatching,including from high mountain species such as Red-billed Chough and Crimson-winged Finch to desert species such as Desert Sparrow, African Desert Warbler or Thick-billed Lark.
Morocco has a long list of regionals difficult to see in other countries such as Levaillant’s Woodpecker, Moussier’s Redstart or the really scarce Northern Bald Ibis.
On this tour we can observe over 170 species of birds, including10 species of Larks, 7 species of Wheatears, 4 species of Sandgrouses and many more rare birds.

Day 1
Meet and welcome in the Marrakech International Airport. This first day we will visit the Central High Atlas. The ski resort of Oukaïmeden offers good chances for the scarce Crimson-winged Finch and the beautiful Atlas Horned Lark. Along with them both Red-billed and Alpine Choughs are to be found. Other birds living here include Common Rock Thrush and Alpine Accentor. In the way up we will scan for other birds including Levaillant’s Woodpecker, Moussier’s Redstart, Firecrest and Dartford Warbler. Arrival to our hotel in Marrakech in the afternoon.

Day 2
Transfer to Agadir, arrival to our hotel and check-in. We will spend most of the day in Tamri. This is a world-famous spot for Northern Bald Ibis. We will enjoy of them as long as necessary. The plains where they live are also excellent for Algerian Shrike, Thekla Lark, Black-eared Wheatears and Peregrine Falcon. The small Tamri estuary is also an excellent place to look for Spanish Sparrow, Isabelline Warbler, Moroccan Magpie, Red-rumped Swallow and several species of migratory waders and gulls. During the afternoon we will spend some time in the Cape Tamri. This is a good place to look for Shags and sea birds (March-April) flying back North. Northern Gannet is a common view as so it is Manx, Yelkouan & Sooty Shearwaters.

Day 3
Early start to explore the Massa River in Souss-Massa National Park. This is an impressive wetland surrounded by coastal dunes where a huge number of migratory birds can be seen. Purple Heron, Little Bittern, Purple Swamphen, Isabelline Warbler, Great Reed Warbler, Moustached Warbler, Black-crowned Tchagra, Brown-throated Martin and Eurasian Spoonbill are only some of the birds that can appear. The area is also noted for Chamaleons living in the scrubs and the young Argan trees.
After lunch we will explore some small pools that can easily report Marbled & White-headed Ducks. It will also the moment to enjoy the beautiful Dorcas Gazelles living in the National Park after a reintroduction project. Transfer to Marrakech.

Day 4
This day we will cross the Atlas to go to the semi-desertic areas. We will have some good birds “en route” such as Barbary Partridge, Rufous Bush Robin, African Blue Tit, Levaillant’s Woodpecker and Seebohm’s Wheatear. The road is also noted for raptors and both Bonelli’s & Golden Eagles can still be seen. During the afternoon we will arrive to the semi-desert and we will enjoy the first views on birds such as Trumpeter Finch, White-crowned Black Wheatear, Desert Grey Shrike while searching for the scarce Maghreb Wheatear. Arrival to our hotel in Boulmane du Dades in late afternoon.

Days 5 & 6
We will explore the steppe lands around Boulmane du Dades. The area is noted for species such as Temminck’s Lark, Cream-coloured Courser, Thick-billed Lark, Long-legged Buzzard, Red-rumped Wheatear and Crowned & Black-bellied Sandgrouses. Here it is also possible to see Lesser Short-toed Lark, Desert Wheatear while both Barbary & Lanner Falcons can be seen hunting in the area.
We will also explore the Gorge du Dades, where Black Wheatear, Blue Rock Thrush, Trumperter Finch, Moussier’s Redstart, Barbary Partridge, Desert Lark, Hoopoe and Tristam’s & Spectacled Warblers are to be found. The area is also noted for migratory birds such as Western Bonelli’s Warbler, Nightingale or Subalpine Warbler.

Day 7
Transfer from Boulmane du Dades to Merzouga. Arrival to Merzouga for lunch. In the way we will have some good birds such as the elusive Scrub Warbler as well as first views on birds such as Blue-cheecked Bee-eater, Little Owl, Laughing Dove and Fulvous Babbler.
During the afternoon we will enjoy of some birding around Yasmina Hotel. Here a large number of migratory passerines are likely to be found including several species of warblers, Common Redstart, Golden Oriole, Pied Flycatcher and many more.

Day 8 & 9
We will expend these two days in the desert areas around the Erg Chebbi. Spotted & Pin-tailed Sandgrouses, African Desert Warbler, Fulvous Babbler, Desert Sparrow, Brown-necked Raven, Egyptian Nightjar, Hoopoe Lark, Bar-tailed Lark, Blue-checkeed Bee-eater, Houbara Bustard, Lanner Falcon and Pharaon Eagle Owl are some of the species we will see.
We will have time also to visit some wetlands, like the Dayet Srji, an impresive lagoon surrounded by the sandy desert. Here it is possible to see Greater Flamingo, Red-knobbed Coot, Marbled Duck, Black-winged Stilt or Hoopoe Lark along with a large variety of waders. Surprises like Ferruginous Duck can appear.

Day 10
Final transfer from Merzouga to Marrakech. Lunch in Ouarzazate. Eventually we will do some short stops “en route” to spot some birds. Arrival to our hotel in Marrakech during the evening, final dinner and last night in Marrakech.
During the next morning, transfer to the airport.